If there were a smaller gravitational effect, which of the following forces do you think would alter in some respect?

A U tube with both ends open to the atmosphere,is partially filled with water. Oil, which is immiscible with water, is poured into one side until it stands at a distance of 10mm above the water level on the other side. Meanwhile the water rises by 65 mm from its original level (see diagram). The density of the oil is 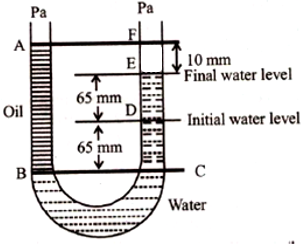 Three liquids of densities  (with ), having the same value of surface tension T, rise to the same height in three identical capillaries. The angles of contact  obey

Two non-mixing liquids of densities  and n(n>1) are put in a container. The height of each liquid is h. A solid cylinder  floats with its axis vertical and length pL  in the denser liquid. The density of the cylinder is d. The density d is equal to:

The approximate depth of an ocean is 2700 m. The compressibility of water is 45.4 x 10-11 Pa-1 and density of water is 103kg/m3. What fractional compression of water will be obtained at the bottom of the ocean?

A wind with speed 40 m/s blows parallel to the roof of a house. The area of the roof is 250 m2. Assuming that the pressure inside the house is atmospheric pressure, the force exerted by the wind on the roof and the direction of the force will be (Pair=1.2kg/m3)
1. 4.8x105N, downwards

(4) water does not rise at all

A certain number of spherical drops of a liquid of radius r coalesce to form a single drop of radius R and volume V. If T is the surface tension of the liquid, then: