Schematically represent primary, secondary and tertiary structures of a hypothetical polymer say for example a protein.

Proteins are the large-sized, heteropolymeric macromolecules having one or more polypeptides (chains of amino acid).

Primary Structure The primary structure of a protein is the linear sequence of amino acid structural units and partially comprises its overall biomolecular structures. The amino acids are linked together in a sequence by peptide bonds.

In the primary structure of protein initiate from an amino-terminal (N) to the carboxyl terminal (C) end, 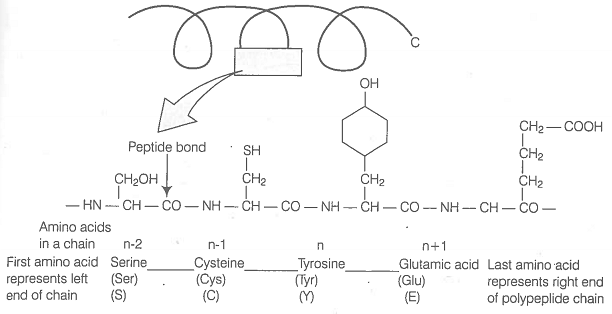 Secondary Structure It is a three dimensional form of local segments of bipolymers such as proteins. Secondary structure of proteins is defined by hydrogen bonds between backbone amino and carboxyl groups. Mainly secondary structure in proteins possess two
forms, i.e., -helix and -pleated sheet.

-helix is a polypeptide chain spirally coiled to form a right handed helix. This helix may be coiled regularly at places and at some places randomly coiled. The helix is stabilised by many hydrogen bonds which are formed between — CO of one amino acid and -— NH group of next fourth amino acid.

-pleated sheets two or more polypeptide chains are joined together by intermolecular hydrogen bonds to produce a sheet like structure instead of fibre as in a-helix. The polypeptide strands in a sheet mayrun parallel in same direction, e.g., keratin or in opposite direction called antiparallel -sheet, e.g., fibroin. 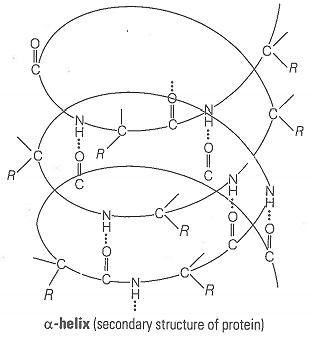 Tertiary structure involves interactions that are caused by the bending and folding of -helix and -sheet leading to the formation of rods, spheres of fibres. Such interactions are typically conferred by H-bonds, ionic bonds, covalent bonds, van der Waal's interactions and hydrophobic interactions or disulphide linkages. It gives the protein a three dimensional conformation. 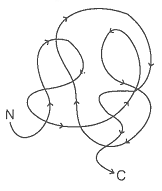