Enzymes are proteins. Proteins are long chains of amino acids linked to each other by peptide bonds. Amino acids have many functional groups in their structure.

These functional groups are many of them at least, ionisable. As they are weak acids and bases in chemical nature, this ionisation is influenced by pH of the solution. For many enzymes, activity is influenced by surrounding pH. This is depicted in the curve below, explain briefly. 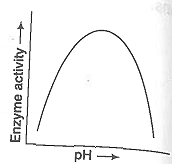 Enzymes, generally function in a narrow range of pH. Most of the enzyme shows their highest activity at a Particular pH called optimum PH, and it declines below and above this value.
Extremely high or low PH values generally results in complete loss of activity for most enzymes. The graph above represents the maximum enzyme activity at the optimum pH.