(ii) Ligands
The neutral molecules or negatively charged ions that surround the metal atom in a coordination entity or a coordinate complex are known as ligands. For example, 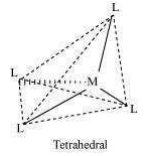