When a nucleus in an atom undergoes a radioactive decay, the electronic energy levels of the atom:

1. do not change for any type of radioactivity

3. change for -radioactivity but not for others

4. change for -radioactivity but not for others

Tritium is an isotope of hydrogen whose nucleus triton contains 2 neutrons and 1 proton. Free neutrons decay into . If one of the neutrons in Triton decays, it would transform into He3 nucleus. This does not happen. This is because;

1. Triton energy is less than that of a He3 nucleus

2. The electron created in the beta decay process cannot remain in the nucleus

3. Both the neutrons in Triton have to decay simultaneously resulting in a nucleus with 3 protons, which is not a He3 nucleus.

4. Free neutrons decay due to external perturbations which is absent in Triton nucleus

Mx and My denote the atomic masses of the parent and the daughter nuclei respectively in radioactive decay. The Q-value for a  decay is Q1 and that for a  decay is Q2. If  denotes the mass of an electron, then which of the following statements is correct?

In a nuclear reactor, moderators slow down the neutrons which come out in a fission process. The moderator used have light nuclei. Heavy nuclei will not serve the purpose, because:

1. they will break up

2. elastic collision of neutrons with heavy nuclei will not slow them down

3. the net weight of the reactor would be unbearably high

4. substances with heavy nuclei do not occur in the liquid or gaseous state at room temperature

Fusion processes, like combining two deuterons to form a He-nucleus are impossible at ordinary temperatures and pressure. The reasons for this can be traced to the fact

Samples of two radioactive nuclides A and B are taken.  and  are the disintegration constants of A and B respectively. In which of the following cases, the two samples can simultaneously have the same decay rate at any time?

The variation of the decay rate of two radioactive samples A and B with time is shown in the figure. 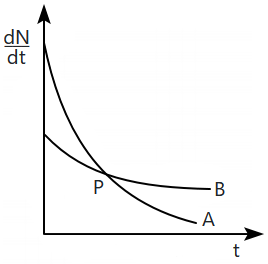 Which of the following statements are true?