Consider a light beam incident from air to a glass slab at Brewster's angle as shown in the figure. A polaroid is placed in the path of the emergent ray at point P and rotated about an axis passing through the centre and perpendicular to the plane of the polaroid. Then: 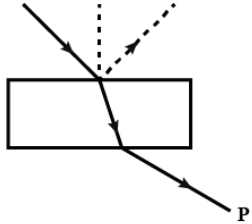 Consider sunlight incident on a slit of width  . The image seen through the slit shall

Consider a ray of light incident from the air onto a slab of glass (refractive index n) of width d, at an angle . The phase difference between the ray reflected by the top surface of the glass and the bottom surface is:

In Young's double-slit experiment, the source is white light. One of the holes is covered by a red filter and another by a blue filter. In this case,

1. there shall be alternate interference patterns of red and blue

2. there shall be an interference pattern for red distinct from that for blue

3. there shall be no interference fringes

4. there shall be an interference pattern for red mixing with one for blue

The figure shows a standard two-slit arrangement with slits  are the two minima points on either side of P as shown in the figure.

At  on the screen, there is a hole and behind  is a second 2-slit arrangement with slits  and a second screen behind them.

1. There would be no interference pattern on the second screen but it would be lighted

2. The second screen would be totally dark

3. There would be a single bright point on the second screen

4. There would be a regular two-slit pattern on the second screen

Two Sources  of intensity  are in front of a screen [Fig.(a)]. The pattern of intensity distribution seen in the central portion is given by Fig.(b).

In this case, which of the following statements are true?

Consider sunlight incident on a pinhole of width  . The image of the pinhole seen on a screen shall be:

(a) a sharp white ring
(b) different from a geometrical image
(c) a diffused central spot, white in colour
(d) diffused coloured region around a sharp central white spot

Consider the diffraction pattern for a small pinhole. As the size of the hole is increased:

For light diverging from a point source: