A point source of light is placed in front of a plane mirror.

1. All the reflected rays meet at a point when produced backward.

2. Only the reflected rays close to the normal meet at a point when produced backward.

3. Only the reflected rays making a small angle with the mirror, meet at a point when produced backward.

Total internal reflection can take place only if

3. the refractive indices of the two media are close to each other

4. the refractive indices of the two media are widely different

In image formation from spherical mirrors, only paraxial rays are considered because they

1. are easy to handle geometrically

2. contain most of the intensity of the incident light

3. form nearly a point image of a point source

A point object is placed at a distance of 30 cm from a convex mirror of focal length 30 cm. The image will form at

The figure shows two rays A and B being reflected by a mirror and going as A' and B'. The mirror 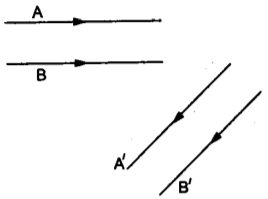 4. may be any spherical mirror

The image formed by a concave mirror

3. is certainly real if the object is virtual

4. is certainly virtual if the object is real

3. the image forms to the right of O"

Four modifications are suggested in the lens formula to include the effect of the thickness t of the lens. Which one is likely to be correct?

A double convex lens has two surfaces of equal radii R and refractive index m = 1.5. We have,

A point source of light is placed at a distance of 2 f from a converging lens of focal length f. The intensity on the other side of the lens is maximum at a distance