Which of the following statements are correct?
(a) Centre of mass of a body always coincides with the centre of gravity of the body
(b) Centre of gravity of a body is the point about which the total gravitational torque on the body is zero
(c) A couple on a body produce both translational and rotation motion in a body
(d) Mechanical advantage greater than one means that small effort can be used to lift a large load

A particle of mass m moves with a constant velocity along 3 different paths, DE, OA and BC. Which of the following statements is not correct about its angular momentum about point O? 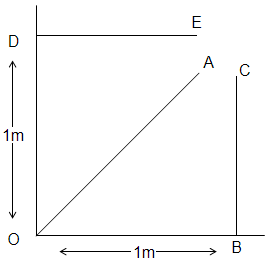 1. It is zero when it is at A and moving along OA.

2. The same at all points along the line DE.

3. Of the same magnitude but oppositely directed at B and  D.

4. Increases as it moves along the line BC.

Given the following statements:
a. The centre of gravity (C.G.) of a body is the point at which the weight of the body acts.
b. If the earth is assumed to have an infinitely large radius, the centre of mass coincides with the centre of gravity.
c. To evaluate the gravitational field intensity due to any body at an external point, the entire mass of the body can be considered to be concentrated at its C.G.
d. The radius of gyration of any body rotating about an axis is the length of the perpendicular dropped from the C.G. of the body to the axis.
Which one of the following pairs of statements is correct?
1. (a) and (b)
2. (b) and (c)
3. (c) and (d)
4. (d) and (a)

1. A implies B and B implies A

3. A implies B but B does not imply A

4. B implies A but A does not imply B

1. A implies B and B implies A

3. A implies B but B does not imply A

4. B implies A but A does not imply B

Given below are two statements:

Assertion: Angular momentum of an isolated system of particles is conserved.

Reason: The net torque on an isolated system of particles is zero and the rate of change of angular momentum equals the torque.

1. Both assertion and reason are true, and the reason is the correct explanation of the assertion.

2. Both assertion and reason are true, but the reason is not the correct explanation of the assertion.

3. Assertion is true but the reason is false.

4. Assertion is false but the reason is true.

NEET MCQ Books for XIth & XIIth Physics, Chemistry & Biology
Consider the following statements-
(a) A body is in translational equilibrium if net force on it is zero.
(b) A body is in rotational equilibrium if net torque about any point is zero.
Choose the correct statements:
1.  (a) only
2.  (b) only
3.  both (a) and (b)
4.  neither (a) nor (b)
Q6:
77% From NCERT
Subtopic:  Rotational Motion: Kinematics | 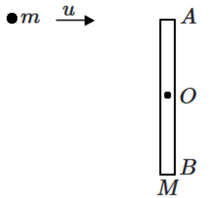