Two persons of masses 55 kg and 65 kg respectively, are at the opposite ends of a boat. The length of the boat is 3.0 m and weighs 100 kg. The 55 kg man walks up to the 65 kg man and sits with him. If the boat is in still water, the center of mass of the system shifts by:

A solid cylinder of mass 3 kg is rolling on a horizontal surface with a velocity of 4 ms-1. It collides with a horizontal spring of force constant 200 Nm-1. The maximum compression produced in the spring will be:

ABC is an equilateral triangle with O as its centre. F1, F2, and F3 represent three forces acting along the sides AB, BC and AC respectively. If the total torque about O is zero, then the magnitude of F3 is: 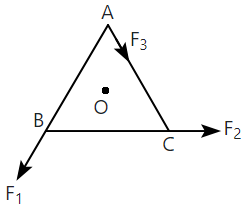 Two particles that are initially at rest, move towards each other under the action of their mutual attraction. If their speeds are v and 2v at any instant, then the speed of the centre of mass of the system will be:

A man of 50 kg mass is standing in a gravity-free space at a height of 10 m above the floor. He throws a stone of 0.5 kg mass downwards with a speed of 2 ms-1. When the stone reaches the floor, the distance of the man above the floor will be:

If \(\vec F\) is the force acting on a particle having position vector \(\vec r\) and \(\vec \tau\) be the torque of this force about the origin, then:

A thin circular ring of mass M and radius R is rotating in a horizontal plane about an axis vertical to its plane with a constant angular velocity ω. If two objects each of mass m are attached gently to the opposite ends of the diameter of the ring, the ring will then rotate with an angular velocity: