What is used as an osmolyte in human beings to increase medullary interstitial osmolality during concentration of urine ?
1. TMAO
2. Urea
3. Both a and b
4. Uric acid

The main disadvantage of urea as an excretory product for animals eliminating it would be:
1. its high toxicity
2. Needs lot of water to be eliminated
3. It being an osmolyte
4. Energy expenditure to produce it

Match each item in Column I with one in Column II and choose the correct option from the codes given below: 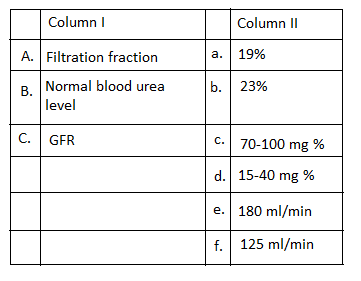 Which of the following statements about the kidneys is incorrect?
1. They consume over 20% of the oxygens used by the body at rest.
2. Approximately 1200ml of fluid is filtrated by the kidneys each day.
3. 120-125 ml of plasma is forced into the renal tubules each minutes.
4. They compose less than 1% of the body weight.

Which of the following does not favour the formation of large quantities of dilute urine ?
1. Alcohol
2. Caffeine
3. Renin
4. Atrial-natriuretic factor

Which one of the following is not a part of a renal pyramid?
1. Convoluted tubules
2. Collecting ducts
3. Loops Henle
4. Peritubular capillaries

What will happen if the stretch receptors of the urinary bladder wall are totally removed?
1. There will be no micturition
2. Micturition will continue
3. Urine will continue to collect in the bladder
4. Both a and c

Trimethylamine oxide is an excretory product in
1. fresh water teleosts
2. marine teleosts
3. marine invertebrate
4. none of these.

Which one of the following statements is correct with respect to salt water balance inside the body of living organisms?
1. When water is not available camels do not produce urine but store urea in tissues.
2. Salmon fish excretes lot of stored salt through gill membrane when in fresh water.
3. Paramecium discharges concentrated salt solution by contractile vacuoles.
4. The body fluids of fresh water animals are  generally hypotonic to surrounding water.

When kidney of a person is damaged, he/she invariably suffers fom anaemia because
1. RBCs pass through the glomerulus
2. Sufficient erythropoietin is not produced
3. haemoglobin is not synthesised sufficiently
4. Iron and viatmin B-12 are not able to bind to haemoglobin.

Assertion   :       In vertebrates, the liver is also referred as an accessory excretory organ.
Reason      :       Liver helps kidneys in the secretion of urine.

If one goes from inside to outside then which of the following parts comes first?
1.Hilum
2.Calyces
3.Pelvis
4.Cortex

The path of urine has which of the following part of kidney as the first organ to be encountered ( other than nephron and collecting Duct)?
1.Renal calyces
2.Medullary pyramids
3.Pelvis
4.Ureter

Which of the following is a straight part of a nephron
1.Henle's Loop
2.Collecting Duct
3.Both A and B
4.PCT

Reabsorption is minimum of which of the following segments of tubule?
1.Ascending limb
2.PCT
3.DCT
4.Descending limb

Angiotensin II has effects over

The release of urine does not take place by

The condition of accumulation of urea in blood is termed as
1. Uremia
2. Diuresis
3. Glycosuria
4. Haematuria

Which one is the vasoconstrictor ?
1. ANF
2. Renin
3, Angiotensin-II
4. Histamine

Select the true statement
1. In fishes kidney play a major role in ammonia excretion
2. Ammonia is 100,000 times less toxic than urea
3. Sharks retain a large amount of urea in the blood as a major osmolyte to balance the osmolarity of the body fluids
4. Most terresterial reptile excrete ammonai

Henle's loops are found in those animals which excrete hypertonic urine. One of the following does not have Henle's loop
1. Birds
2. Mammals
3. Frogs
4. Reptiles

Which of the following is not a feature of cortical nephrons ?
1. These are more common, approximately 85% of nephrons
2. Their glomeruli are in outer cortex
3. Their loop of Henle extend to a short distance into the medulla
4. They are associated with vasa recta

In Omithine cycle, which of the following wastes are removed from the blood ?
1. Urea and urine
2. Ammonia and urea
3. CO2 and ammonia
4. CO2 and urea

A : Inner wall of Bowman's capsule is lined with specialized cells-podocytes having a number of projections.
R : These projections increases the surface area for absorptions