Identify the colonies labelled as A and B. 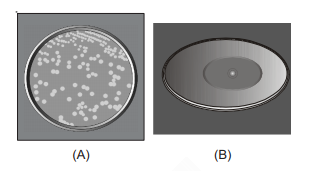 Dosa and Idli are fermented preparation of rice and black gram. The fermentation is done with
1. Leuconostoc
2. Streptococcus
3. Saccharomyces
4. More than one option is correct

Read the following four statements (A - D) about certain mistakes in two of them :
(A) Dough, which is used for making foods such as dosa and idli is fermented by fungi and algae
(B) Toddy, a traditional drink of southern India is made by fermenting sap. from palms.
(C) Large hole in 'Swiss cheese' are due to production of large amount of methane by Propionibacterium sharmanii
(D) In our stomach, lactic acid bacteria play very beneficial role in checking disease-causing microbes
Which are the two statements having mistakes ?
1. Statements (A) & (C)
2. Statements (A) & (B)
3. Statements (B) & (C)
4. Statements (C) & (D)

Identify the correct statements with respect to antibiotics
(i) Fleming, Chain and Florey were awarded the Nobel prize in 1945
(ii) Antibiotics have greatly improved our capacity to treat deadly diseases
(iii) Penicillin was used to treat American soldiers wounded in World War l
1. (i) and (ii)
2. (i) and (iii)
3. (ii) and (iii)
4. All are correct

All are correct with respect to BOD (Biochemical Oxygen Demand), except
1. It refers to the amount of oxygen that would be consumed if all the organic  matter in one liter of water were oxidised by bacteria
2. The BOD testis a measure of the organic matter present in the water
3. The greater the BOD of waste water, less is its polluting potential
4. Waste water is treated till BOD is reduced significantly

Baculoviruses are/have
1. Pathogens that attack insects and other arthropods
2. Members of genus Nucleopolyhedrovirus that are never used as biocontrol
3. Species-specific, broad spectrum insecticides
4. Few negative impacts on plants, mammals, birds, fishes or even on non-target insects

Which of the following is not a symbiotic nitrogen fixing bacterium?
1. Clostridium
2. Rhizobium leguminosarum
3. Frankia
4. Mycobacterium

Match the following list of microbes and their importance:

The domestic sewage in large cities
1. Has a high BOD as it containing both aerobic and anaerobic bacteria
2. Is processed by aerobic and then anaerobic bacteria in the secondary treatment in Sewage Treatment Plants (STPs)
3. When treated in STPs does not really require the aeration step as the sewage contains adequate oxygen
4. Has very high amounts of suspended solids and dissolved salts

Monascus purpureus is a yeast used commercially in the production of
1. Blood cholesterol lowering statins
2. Ethanol
3. Streptokinase for removing clots from the blood vessels
4. Citric acid

In Gobar gas, the maximum amount is that of
1. Butane
2. Methane
3. Propane
4. Carbon dioxide

Measuring Biochemical Oxygen Demand (BOD) is a method used for
1. Measuring the activity of Saccharomyces cervisae in producing curd on a commercial scale
2. Working out the efficiency of R.B.Cs. about their capacity to carry oxygen
3. Estimating the amount of organic matter in sewage water
4. Working out the efficiency of oil-driven automobile engines

The most abundant prokaryotes helpful to humans in making curd from milk and in production of antibiotics are the ones categorised as
1. Chemosynthetic autotrophs
2. Heterotrophic bacteria
3. Cyanobacteria
4. Archaebacteria

Which one of the following is a wrong matching of a microbe and its industrial product, while the remaining three are correct?
1. Clostridium butylicum - lactic acid
2. Aspergillus niger - citric acid
3. Yeast - statins
4. Acetobacter aceti - acetic acid

Which one of the following microbes forms symbiotic association with plants and helps them in their nutrition?
1. Glomus
2. Trichoderma
3. Azotobacter
4. Aspergillus

The most common substrate used in distilleries for the production of ethanol is
1. Molasses
2. Corn meal
3. Soya meal
4. Ground gram

Which one of the following is not a biofertilizer?
1. Mycorrhiza
2. Agrobacterium
3. Rhizobium
4. Nostoc

Consider the following statements (A-D) about organic farming
A. Utilizes genetically modified crops like Bt cotton.
B. Uses only naturally produced inputs like Compost.
C. Does not use pesticides and urea.
D. Produces vegetables rich in vitamins and minerals.
Which of the above statements are correct?
1. (B) and (C) only
2. (A) and (B) only
3. (B), (C) and (D)
4. (C) and (D) only

Select the correct statement from the following
1. Activated sludge-sediment in settlement tanks of sewage treatment plant is a rich source of aerobic bacteria
2. Biogas is produced by the activity of aerobic bacteria on animal waste
3. Methanobacterium is an aerobic bacterium found in rumen of cattle
4. Biogas, commonly called gobar gas, is pure methane

A common biocontrol agent for the control of plant diseases is
1. Trichoderma
2. Baculovirus
3. Bacillus thuringiensis
4. Glomus