Identify a character that is not desirable in a cloning vector:
1. an inactive promoter
2. an origin of replication site
3. selectable markers such as genes for antibiotic resistance
4. one or more unique restriction endonuclease sites

When isolating the pure DNA from a bacterial cell, the cell should not be treated with:
1. lysozyme
2. proteases
3. ribonuclease
4. deoxyribonuclease

A host cell normally does not take up a foreign DNA until it has been made competent to do so. This is because:
1. DNA is a hydrophilic molecule
2. DNA is a very large molecule
3. there are no receptors for DNA on the cell membrane
4. DNA is an inert molecule

Which statement regarding restriction endonucleases is NOT correct?
1. They recognize a specific base sequence in the DNA.
2. They are produced by bacterial cells as a primitive immune system.
3. They digest DNA by removing nucleotides from a free 3' end.
4. They often generate stick ends.

The technique not used for transformation of plant cells in recombinant procedures is:
1. Biolistics
2. Agrobacterium mediation
3. Use of viruses
4. Micro-injection

Restriction enzymes are synthesized by:
1. Bacteria only
2. Yeast and bacteria only
3. Eukaryotic cells only
4. All kinds of cells

Which of the following is not a component of downstream processing?
1. Separation
2. Purification
3. Preservation
4. Expression

Electroporation procedure involves
1. fast passage of food through sieve pores in phloem elements with the help of electric stimulation
2. opening of stomatal pores during night by artificial light
3. making transient pores in the cell membrane to introduce gene constructs
4. purification of saline water with the help of a membrane system.

Go through the statements:
A. During the processing of the prohormone "proinsulin" into the mature "insulin", C-peptide is removed from proinsulin.
B. In hydridoma technology, B-cells are fused with myeloma cells.
C. Genetic engineering has been successfully used for producing transgenic mice for testing safety of polio vaccine before use in humans.
D. Some of the characteristics of Bt cotton are high yield and resistance to bollworms.
E. An improved variety of transgenic basmati rice gives high yield and is rich in vitamin A.
F. Gray biotechnology' is referred to industrial process.
G. The polymerase chain reaction is a technique that is used for in vivo replication of DNA.
How many statement(s) is wrong?
(1) One
(2) Two
(2) Four
(4) Six

In 1960’s two enzymes were discovered in bacteria that were responsible for providing immunity against bacteriophages. One was Restriction Endonuclease and the other was
1. Methylase
2. Exonuclease
3. Aminotransferase
4. Terminal Transferase

E.coli is  a commonly used host for gene cloning because
1. It is free from elements that interfere with replication and recombination of DNA
2. It is easy to transform
3. It supports replication of inserted DNA.
4. All of these

Look at the given hypothetical vector- 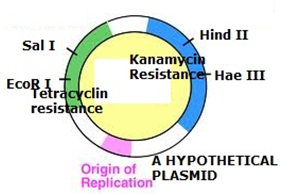 Suppose we cut the desired gene as well as the plasmid with the help of the Restriction enzyme EcoR I and ligate them. What would be true-

If one needs to derive a cDNA of human insulin, which cells should be taken up for extraction?

Plasmids are good vectors for genetic engineering because

Why is a marker gene useful?
1. It shows you whether the gene being added, has been taken up or not.
2. It's a way of labelling which gene you want to modify.
3. It sticks with the striker gene.
4.  It marks the position of r-DNA

If you transform a cell with an alien piece of DNA only, What is the possibility?
1.      This alien piece becomes a part of the host genome.
2.      It doesn't become a part of the host's genome but keeps on replicating
3.      The cloning of genes won't get affected in the absence of Origin of replication.
4.     Multiple identical copies of an alien piece of DNA can be formed irrespective of its integration into the host's genome.

Restriction endonuclease cuts
1. At palindromic sequences for some enzymes not for all
2. After scanning and recognition of specific sequence in a DNA strand
3. Cuts the strand exactly at the centre
4. All of these