The displacement x of a particle moving in one dimension under the action of a constant force is related to time t by the equation , where x is in meters and t is in seconds. Find the displacement of the particle when its velocity is zero.
1. zero
2. 12 m
3. 6 m
4. 18 m

A ball is dropped into a wekk in which the water level is at a depth h below the top. If the speed of sound is c, then the time after which the splash is heard will be given by
1.
2.
3.
4.

A particle slides from rest from the topmost point of a vertical circle of radius r along a smooth chord making an angle  with the vertical. The time of descent is
1. Least for = 0
2. Maximum for = 0
3. Least for  =45
4. Independent of

A train is moving at a constant speed V when its driver observes another train in front of him on the same track and moving in the same direction with constant speed v. If the distance between the trains is x, then what should be the minimum retardation of the train so as to avoid collision?
1.
2.
3.
4.

The velocity-time graph of a particle moving in a straight line is shown in the figure. The acceleration of the particle at t= 9 s is 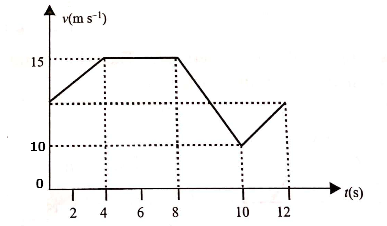 The following graph shows the variation of velocity of a rocket with time. Then the maximum height attained by the rocket is 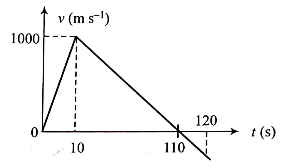 An object is thrown up vertically. The velocity-time graph for the motion of the particle is
1.

The displacement versus time curve is given (Figure). Sections OA and BC are parabolic. CD is parallel to the time axis.

Statement I- The displacement of a body may be zero, though its distance can be finite.
Statement II- If the body moves such that finally it arrives at the initial point, then displacement is zero while distane is finite.