The variation of momentum with the time of one of the bodies in a two-body collision is shown in fig. The instantaneous force is the maximum corresponding to the point- 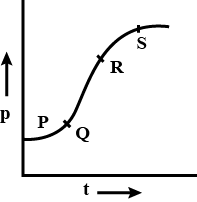 At the instant t = 0 a force F= kt (k is a constant) acts
on a small body of mass m resting on a smooth horizontal
plane. The time, when body leaves the surface is :

A particle of mass m initially at rest, is acted upon by a vanable force F for a brief interval of time T.
It begins to move with a velocity u after the force stops acting.
F is as a function of time shown in the graph. The velocity of the particle is : 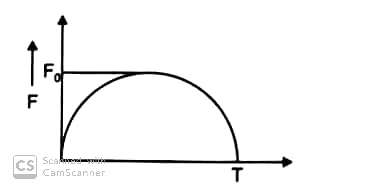 The tension in rope (Rope is light) :

There is a 90° bend in a pipe line in which water is flowing at speed v.
The cross sectional area of pipe is A. The force exerted by pipe walls on water at bend is :

The monkey B shown in the figure is holding on to the tail of the monkey A which is climbing up a rope.
The mass of the monkeys A and B are 5 kg and 2kg respectively. If A can tolerate a tension of 30N on its tail,  what maximum force should it apply on the rope in order to carry the monkey B with it ? (Take g=10 ) 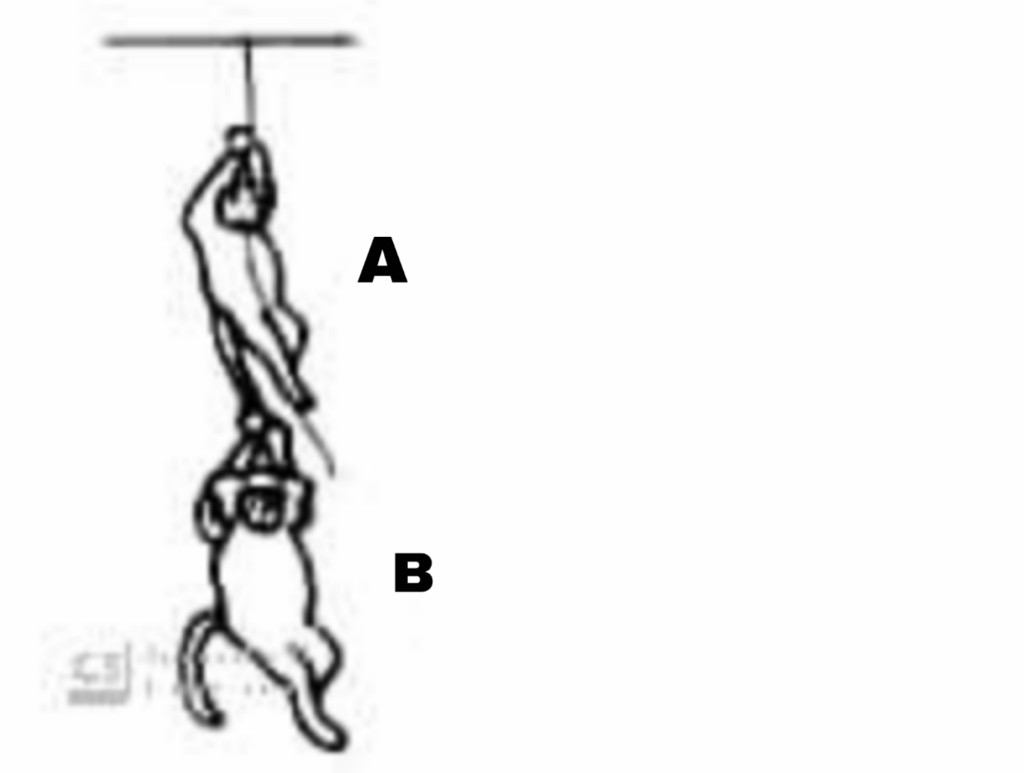 A body start from rest from the top of an inclined plane whose upper half is perfectly smoth while lower half is rough.,
and come to the rest at the bottom of the inclination angle is ϕ.
Then the coefficient of of friction for the lower half will be

A block of mass M rests on a rough horizontal surface coefficient of friction between the block and the surface is μ. A force F = Mg acting at an angle φ = 60° with the vertical side of block pulls it.
in which of the following cases, the block can be pulled along the surface.

A string with constant tension T is deflected through an angle  by a smooth fixed pulley. The force on the pulley is

A string of negligible mass going over a clamped pulley of mass m supports a block of mass M as shown in the figure. The force on the pulley by the clamp is given by 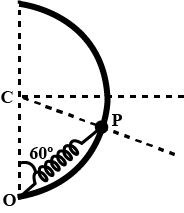 Two blocks of masses 2.9 kg and 1.9 kg are suspended from a rigid support S by two extensible wires each of length 1 m as shown in figure. The upper wire has negligible mass and lower wire has a uniform mass of 0.2. The whole system of blocks, wires and support have an upward acceleration of
Taking g = 9.8  we have

A mass m1, placed on top of a trolley of mass m3, is connected to another mass m2 by means of string passing over a smooth pulley as shown in figure. The friction between surfaces is negligible. For m1 ans m2 not to move with respect to trolley, the horizontal force F to be applied on trolley is 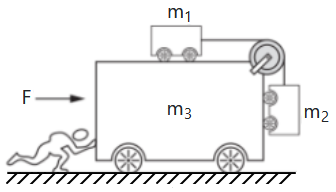 A pendulum of mass m hangs from a support fixed to a trolley. The direction of the string when the trolley rolls up a plane of inclination  with acceleration  is 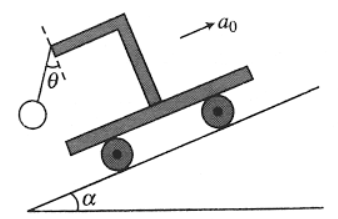 Two masses are connected by a string which passes over a pulley accelerating upward at a rate A as shown. If  be the accelerations of bodies 1 and 2 respectively then,

A ball of mass m is thrown upward with a velocity v. If air exerts an average resisting force F, the velocity with which the ball returns to the thrower is
1.
2.
3.
4.

The pulleys and string shown in the figure are smooth and of negligible mass. For the system of remain in equilibrium, the angle  should be 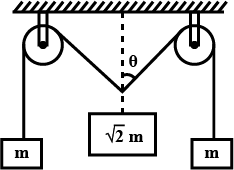 A horizontal force of 10 N is necessary to just hold a block stationary against a wall. The coefficient of friction between the block and the wall is 0.2. The weight of the block is

The figure shows the position-time (x-t) graph of one-dimensional motion of a body of mass 0.4 kg. The magnitude of each impulse is

System shown in figure is in equilibrium and at rest. The spring and string are massless, now the stringis cut. The acceleration of mass 2m and m just after string is cut will be