The spatial distribution of the electric field due to charges (A, B) is shown in figure. Which one of the following statement is correct?

Three charges  are placed as shown in the figure. The x-component of the force on  is proportional to 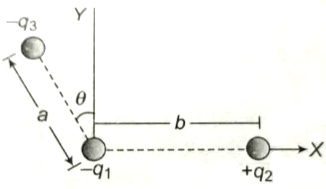 Two equal charges are separated by a distance d. A third charge placed on a perpendicular bisector at x distance will experience maximum coulomb force when
1.
2.
3.
4.

Three positive charges of equal value q are placed at the vertices of an equilateral triangle. The resulting lines of force should be sketched as in
1. 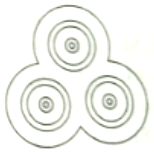 There are three concentric thin spheres of radius a, b, c (a>b>c). The total surface charge densities on their surfaces are  respectively. The magnitude of electric field at r (distance from centre) such that a>r>b is:
1.
2.
3.
4.  none of these

The electric field in a certain region is acting radially outward and is given by E=Ar. A charge contained in a sphere of radius 'a' centred at the origin of the field will be given by
1.
2.
3.
4.

A charge Q is enclosed by a Gaussian spherical surface of radius R. If the radius is doubled, then the outward electric flux will
1.  be reduced to half
2.  remain the same
3.  be doubled
4.  increase four times 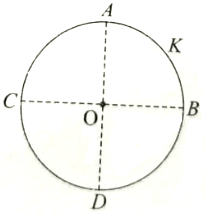 A uniformly charged and infinitely long line having a liner charge density '' is placed at a normal distance y from a point O. Consider a sphere of radius R with O as centre and R>y. Electric flux through the surface of the sphere is:

A point charge +Q is positioned at the centre of the base of a square pyramid as shown. The flux through one of the four identical upper faces of the pyramid is 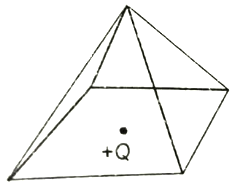 In the  given figure two tiny conducting balls of identical mass m and identical charge q hang from non-conducting threads of equal length L. Assuming that  is so small that tansin, then for equilibrium x is equal to 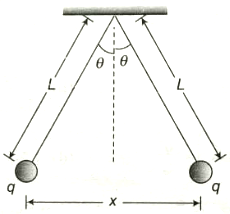 Assertion: Vehicle carrying highly inflammable materials have hanging chains, slightly touching the ground.
Reason: The body of a vehicle gets charged when moving through air at high speed.

Assertion: The tyres of aircraft's are slightly conducting.
Reason: If a conductor is connected to ground, the extra charge induced on conductor will flow to ground.

Assertion: A charged conductor may have charged particle inside it.
Reason: There can't exist electric field lines inside the conductor.