Three point masses , and are placed at the corners of a thin massless
rectangular sheet (1.2 m x 1.0 m) as shown. Centre of mass will be located at the point 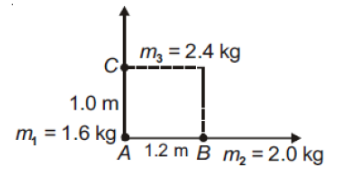 Figure shows a composite system of two uniform rods of lengths as indicated. Then the coordinates of the centre of mass of the system of rods are 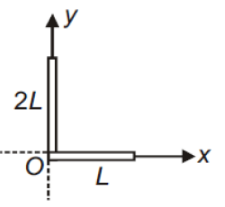 A circular plate of diameter ‘a’ is kept in contact with a square plate of side a as
shown. The density of the material and the thickness are same everywhere. The
centre of mass of composite system will be

From a uniform square plate, one-fourth part is removed as shown. The
centre of mass of remaining part will lie on 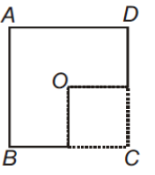 A man of mass m is suspended in air by holding the rope of a balloon of mass
M. As the man climbs up the rope, the balloon

A man of mass m starts moving on a plank of mass M with constant velocity
v with respect to plank. If the plank lies on a smooth horizontal surface, then
velocity of plank with respect to ground is
1.
2.
3.
4.

Two particles A and B initially at rest move towards each other under a
mutual force of attraction. At the instant when velocity of A is v and that
of B is 2v, the velocity of centre of mass of the system
1. v
2. 2v
3. 3v
4. Zero

A ball of mass m is thrown upward and another ball of same mass is thrown
downward so as to move freely under gravity. The acceleration of centre of
mass is
1. g
2. g/2
3. 2g
4. Zero

A bomb of mass m is projected from the ground with speed y at angle with the
horizontal. At the maximum height from the ground it explodes into two
fragments of equal mass. If one fragment comes to rest immediately after explosion, then the horizontal range of centre of mass is
1.
2.
3.
4.

Two blocks of masses 5 kg and 2 kg are connected by a spring of negligible mass
and placed on a frictionless horizontal surface. An impulse gives a velocity of 7
rn/s to the heavier block in the direction of the lighter block. The velocity of the
centre of mass is
1. 30 m/s
2. 20 m/s
3. 10 m/s
4. 5 m/s