Assertion : Two cell of unequal emfs  and respective internal resistances are joined together as shown, Then, one cell will continuously supply energy to the other. 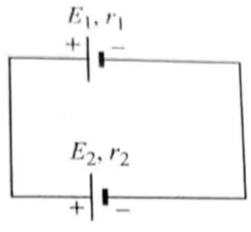 Reason : The potential drop across one cell will be larger than the other cell.

Assertion: When current is passed through a metallic wire, it becomes red hot. When cold water is poured on half of its portion, then rest of the half portion becomes more hot.
Reason : Resistance decrease due to a decrease in temperature. So, current through the wire increases.

Assertion : The current / is zero for any value of resistance R.

Reason: The potential drop across 24-ohm resistor is always 4.8 V for any value of R. So, the current through R remains zero.

Asserion : In the circuit shown in the figure, emf and internal resistance of the cell are respectively E = 2 V and r = 1 ohm. Then, the reading of the voltmeter is 1 V. 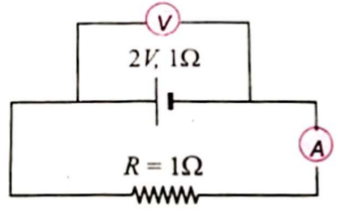 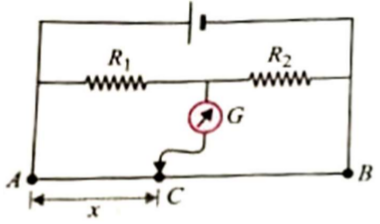 Reason : The resistance of a wire is inversely proportional to the square of its radius. 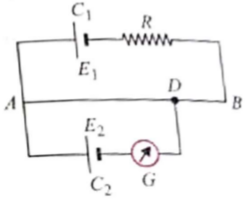 Reason : At the balance point, the potential difference between AD due to

Assertion : In a region of space, both electric and magnetic fields act in the same diretion. When a charged particle is projected parallel to fields, it moves undeviated.
Reason : Here, the net force on the particle is not zero.

Assertion : Two straight current-carrying conductors A and B are lying in a vertical plane as shown. The separation between them is h and mass per unit length is . Keeping A fixed, when B is raised by a small height dh, the net work done by external force per unit length will be gdh.

Reason : The work done by magnetic field during this process is non zero.

Assertion : Flux of magnetic field  through a closed surface is zero. i.e., .
Reason : Magnetic field lines are closed curves. They don't have any beginning or end.

Assertion : In the arrangement shown, the hoop carries a constant current. This hoop can remains stationary under the effect of the magnetic field of the bar magnet. 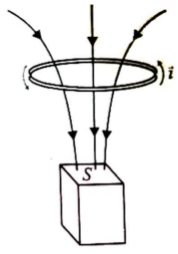 Reason : When a magnetic dipole is placed in a non-uniform magnetic field, it experiences a force opposite to the external magnetic field at its center.

Assertion : Suppose we move along a line parallel to the current-carrying metal wire with a speed which is the same as the drift speed of the free electron. The magnitude of the magnetic field measured by us is zero.
Reason : Due to moving charge, magnetic field intensity at any point with respect to the observer is given by  where  is the velocity of charged particle with respect to observer who is measuring thefield.