Look at the drawing given in the figure which has been drawn with ink of uniform line-thickness. The mass of ink used to draw each of the two inner circles, and each of the two line segments is m. The mass of the ink used to draw the outer circle is 6 m. The coordinates of the centres of the different parts are: outer circle (0, 0), left inner circle (-a, a), right inner circle (a, a), vertical line (0, 0) and horizontal line (0, -a). The y-coordinate of the centre of mass of the ink in this drawing is -

The bricks, each of length L and mass M are arranged as shown, from the wall. The distance of the centre of mass of the system from the wall is : 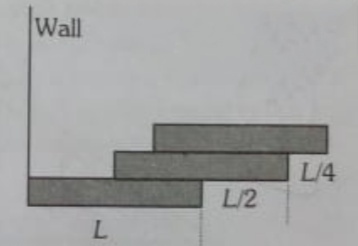 A 'T' shaped object with uniform mass density and dimensions shown in the figure, is lying on a smooth floor. A force  is applied at the point P parallel to AB, such that the object has only the translational motion without rotation. Find the location of P with respect to C. 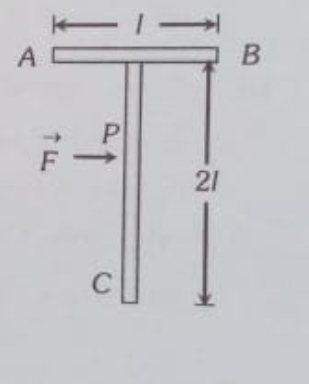 A uniform disk of mass M and radius R is mounted on a fixed horizontal axis. A block of mass m hangs from a massless string that is wrapped around the rim of the disk. The magnitude of the acceleration of the falling block (m) is :
(1)
(2)
(3)
(4)

Three rings each of mass M and radius R are arranged as shown in the figure. The moment of inertia of the system about YY' will be : 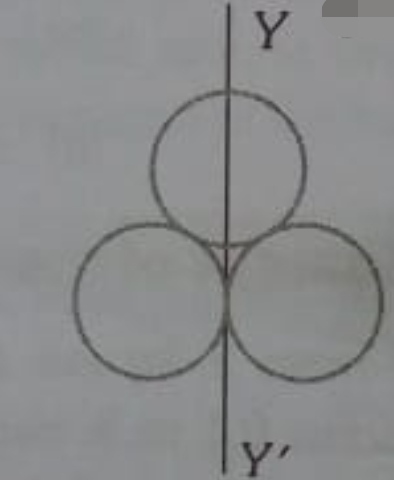 For the given uniform square lamina ABCD whose centre is O : 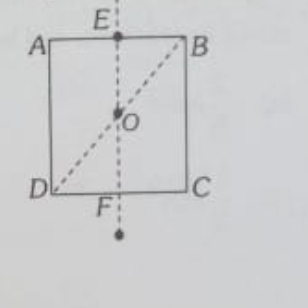 From a circular disc of radius \(R\) and mass \(9M,\) a small disc of radius \(R/3\) is removed from the disc. The moment of inertia of the remaining disc about an axis perpendicular to the plane of the disc and passing through 'O' is: 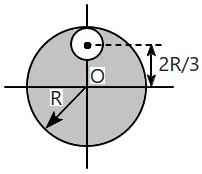 A horizontal force F is applied such that the block remains stationary. Then which of the following statement is false? 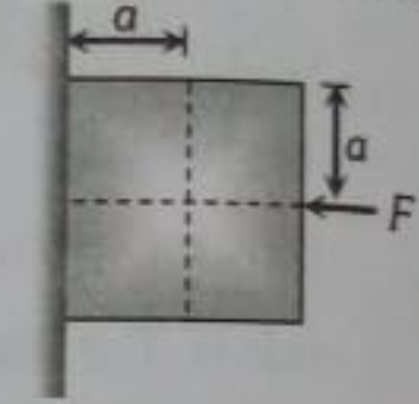 The total torque about pivot A provided by the forces shown in the figure, for L = 3.0 m, is

A particle of mass m moves along line PC with velocity v as shown. What is the angular momentum of the particle about O ?

A mass m moves in a circle on a smooth horizontal plane with velocity  at a radius . The mass is attached to string which passes through a smooth hole in the plane as shown. When radius becomes  , what is the kinetic energy of the particle? 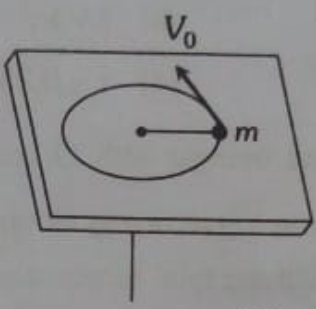 Two discs of the moment of inertia  and angular speeds  are rotating along collinear axes passing through their centre of mass and perpendicular to their plane. If the two are brought in contact and made to rotate along the same axis,  the rotational KE of system will be -
(1)
(2)
(3)
(4) None of these

A small object of uniform density rolls up a curved surface with an initial velocity v. It reaches up to a maximum height of  with respect to the initial position.

A solid disc rolls clockwise without slipping over a horizontal path with constant speed v. Then the magnitude of the velocities of points A, B and C with respect to the standing observer are respectively: