The kinetic energy k of a particle moving along a circle of radius R depends on the distance covered s as k =  where a is a constant. The force acting on the particle is
1.
2.
3.  2as
4.

A particle of mass m is moving in a circular path of constant radius r such that its centripetal acceleration  is varying with time t as, =, The power delivered to the particle by the forces acting on it is
1.
2.
3.
4.  Zero

The figure shows four paths for a kicked football. Ignoring the effects of air on the flight, rank the paths according to initial horizontal velocity component, highest first 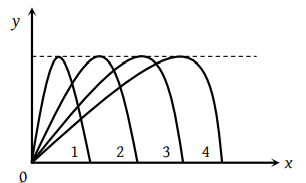 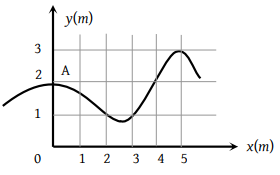 The light y and the distance x along the horizontal plane of a projectile on a certain planet (with no surrounding atmosphere) are given by  meter and x = 6t meter, where t is in second. The velocity with which the projectile is projected is
1.  8 m/sec
2.  6 m/sec
3.  10 m/sec
4.  Not obtainable from the data

A body of mass m is thrown upwards at an angle  with the horizontal with velocity v. While up the velocity of the mass after t second will be
(1)
(2)
(3)
(4)

Four bodies P, Q, R and S are projected with equal velocities having angles of projection  with the horizontal respectively. The body having shortest range is
1.  P
2.  Q
3.  R
4.  S

A particle is moving on a circular path of radius r with uniform velocity v. The change in velocity when the particle moves from P to Q is 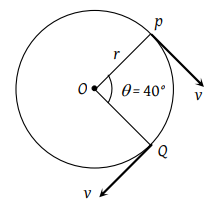 A cannon on a level plane is aimed at an angle above the horizontal and a shell is fired with a muzzle velocity vo towards a vertical cliff a distance D away. Then the height from the bottom at which the shell strikes the sidewalls of the chiff is
(1)
(2)
(3)
(4)