What is true for the fungi in which perfect stage is not known?
1. Some members are saprophytes or parasites
2. Once perfect stage were discovered they were often moved to ascomycetes or basidiomycetes
3. large number of them are decomposers of litter and help in mineral cycling
4. All of them

Match the scientist with their contribution:

Member of which group are found in aquatic habitats and on decaying wood in moist and damp places or as obligate parasites
1. Ascomycetes
2. Deuteromycetes
3. Phycomycetes
4. Basidiomycetes

Find out the set of correct statements for the given diagram.

What is the appropriate sequence of sexual cycle for the members of puffballs’s group? The representations given below

Label A, B, C, D in the given diagram 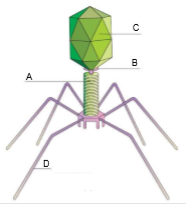 Which of the following is the symptom in plants due to viral infection?
1. Leaf rolling and curling
2. Yellowing and vein clearing
3. Dwarfing and stunted growth
4. All of these

How many characteristics are present in the group to which Gonyaulax belongs?
a. Mostly marine and photosynthetic
b. members appear either green or golden depending on the pigment in the cell
c. Cell wall has stiff cellulose plates
d. most of them have two flagella one lies longitudinally and the other transversely
1. 2
2. 3
3. 4
4. 1

Given below are the four statements regarding virus. Which of them is incorrect?
1. In general, viruses that infect plants have single stranded RNA and bacteriophages are usually  double stranded DNA viruses
2. Capsomeres, are arranged in helical or polyhedral geometric forms
3. have inert crystalline structure outside the living cell
4. Cause disease like AIDS, common cold, and potato spindle tuber disease

Give one word for the following from the given options

Select incorrect option w.r.t. BGA and bacteria
1. Both are prokaryote
2. BGA is not motile in any stage of life but bacteria can be motile
3. Heterocyst are formed in few BGA for nitrogen fixation and it is not formed in bacteria
4. BGA and bacteria both can be autotrophic and heterotrophic

Identify the blanks in the following figure :- 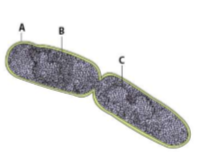 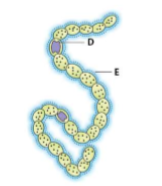 Cell walls of all fungi consists of the polysaccharide
1. Chitin
2. Cellulose
3. Silica
4. Pectin

Match the following Column I with Column II

License are composite organism made up of a fungus and a photosynthetic alga. Which of the following statements is wrong about lichen?
1. Lichens are sensitive to air pollution because they have no way to excrete toxic substances
2. Algal partner (phycobiont) and fungal partner (mycobiont) live mutually
3. Algae prepare food for fungi and fungi provide shelter and absorb water+minerals for algal partner
4. None of these

Study the diagram given below and mark the correct option.

Following four are statements related to bacterial reproduction, find out incorrect statement.
1. Under unfavorable conditions they produce spore
2. They also reproduce by a sort of sexual reproduction
3. They have advance type of DNA transfer mechanism
4. Bacteria mainly reoriduce by fission

Out of the following four statements which of the two statements are incorrect with respect to heterotrophic bacteria.
a. They are most abundant in nature
b. Most of them are producer
c. Some of them are pathogenic
d. They have no beneficial activity
1. 2 and 3
2. 2 and
3. 1 and 2
4. 1 and 4

The soil which is used in polishing filtration of oils and syrups are made of
1. Cellulosic plates on the surface of Dinoflagellates.
2. Cell body of desmids.
3. Cell wall of cryophytes.
4. Extremely resistant spores of slime moulds.

Study the diagram given below, which group of bacteria can be motile.

Which of the following is not true about bacteria.
1. Vert simple in structure but complex in behavior
2. They show extensive metabolic diversity
3. They are present only in simple condition
4. Most of them are heterotrophs

Which of the following statement is not correct about different classification systems?
1. Plant and animal kingdoms have been constant under all different systems
2. understanding of what groups/organisms be included under these kingdoms have been changing.
3. Number and nature of other Kingdoms have also been understood differently by different scientists over time
4. Once an organism is placed to one kingdom than its position is permanent

Classification undergoes constant modification this is due to
a. New evidences from different source
b. Improvement in our understanding of characteristics and evolutionary relationship
c. Dynamic nature of living organism with respect to time
d. Country specific nature of classification.
1. 1 and 2
2. 1 and 3
3. 2 and 3
4. 3 and 4

Feature which is responsible for the survival of archaebacteria in extreme condition is.
1. Their spiral shape and flagella
2. Heterocyst
3. Mucilaginous sheath
4. Cell wall

Which statement (s) is/are not true for five kingdom classification proposed by
R.H.Whittaker [1969].
(A) The main criteria for classification used by him includes cell structure, thallus organization, mode of nutrition, reproduction and phylogenetic relationship.
(B) Chlamydomonas, Chlorella and spirogyra are placed in Algae within plants due to presence of cell wall.
(C) Fungi are placed in a separate kingdom - kingdom fungi.
(D) Paramecium and Amoeba are placed in animal kingdom due to lack of cell wall.
(E) All prokaryotic organisms such as bacteria, blue green algae and ferns are grouped together under kingdom Monera.
Options:

Which of the following combination (s) is incorrect?