Shown in the figure is a conductor carrying a current I. The magnetic field intensity at the point O (common centre of all the three arcs) is ( in radian)

Three long straight wires are connected parallel to each other across a battery of negligible internal resistance. The ratio of their resistances are 3 : 4 : 5. What is the ratio of distances of middle wire from the others if the net force experienced by it is zero

A wire is bent to form a semi-circle of radius a. The wire rotates about its one end with angular velocity . Axis of rotation being perpendicular to plane of the semicircle. In the space, a uniform magnetic field of induction B exists along the axis of rotation as shown. The correct statement is

(1) potential difference between P and Q is equal to 2Ba2

(2) potential difference between P and Q is equal to 22Ba2

(3) P is at higher potential than Q

(4) potential difference between P and Q is zero.

A conducting wire bent in the form of a parabola  carries a current i = 2A as shown in figure. This wire is placed in a uniform magnetic field  tesla. The magnetic force on the wire is

In the figure shown a coil of single turn is wound on a sphere of radius R and mass m. The plane of the coil is parallel to the inclined plane and lies in the equatorial plane of the sphere. Current in the coil is i. The value of B if the sphere is in equilibrium is

Three infinitely long thin conductors are joined at the origin of coordinates and lies along the x, y and z axes. A current i flowing along the conductor lying along the negative x-axis divide equally into the other two at the origin. The magnitude of magnetic field at the point (0, –a, 0) is

A uniform current carrying ring of mass m and radius R is connected by a massless string as shown. A uniform magnetic field  exist in the region to keep the ring in horizontal position, then the current in the ring is (l = length of string)

A long wire having linear charge density moving with constant velocity v along its length. A point charge moving with same speed in opposite direction and at that instant it is r distance from the wire. The net force acting on the charge is given by

A cylindrical wire of radius R is carrying current i uniformly distributed over its cross-section.  If a circular loop of radius r is taken as amperian loop, then the variation value of  over this loop with radius 'r' of loop will be best represented by:
(1)

Two infinitely long, thin, insulated, straight wires lies in the x-y plane along the x and y-axes respectively. Each wire carries a current I, respectively in the positive x-direction and positive y-direction. The magnetic field will be zero at all points on the straight line

There is a uniform magnetic field perpendicular to the plane of paper. A positive charged particle enters in the region, perpendicularly and collides inelastically at point Q to the rigid wall MN. If Co-efficient of restitution e = ½ then particle 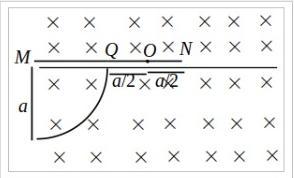 Two charged particles having charge Q and –Q, and masses m and 4m respectively enters in uniform magnetic field B at an angle with magnetic field from same point with speed v. The displacement from starting point where they will meet again, is

A thin wire of length l is carrying a constant current. The wire is bent to form a circular coil. If radius of the coil, thus formed, is equal to R and number of turns in it is equal to n, then which of the following graphs represent(s) variation of magnetic field induction (B) at centre of the coil