Find the coordinates of the points which divide the line segment joining A(–2, –2) and B(2, 8) into four equal parts.

Find the coordinates of the point Q on the X-axis, which lies on the perpendicular bisector of the line segment joining the points A(–5, –2) and B (4, –2). Name the type of triangle formed by the points Q, A and B. NCERT Exemplar

Find the perpendicular distance of A (5, 12) from the Y-axis.

If A is a point on Y-axis, whose ordinate is 3 and coordinates of point B is (‒5, 2), then find the distance AB.

What is the distance between the points  and ?

Find the point which lies on the perpendicular bisector of the line segment joining the points A(‒2, ‒5) and B (2, 5). NCERT Exemplar

In the following figure, find the area of ΔABC.  CBSE 2013 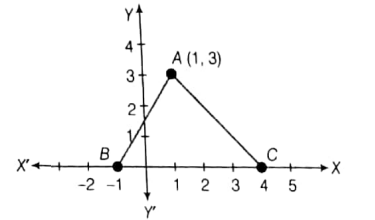 Show that if a circle has its centre at the origin and a point P(5, 0) lies on it, then the point Q (6, 8) lies outside the circle. NCERT Exemplar

In the given figure, in ΔABC, D and E are the mid-points of the sides BC and AC respectively. Find the length of DE. Prove that .  CBSE 2011

Observe the graph given below and state whether ΔABC is scalene, isosceles or equilateral. Justify your answer. Also, find the area of ΔABC. 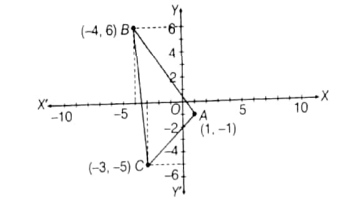 To raise social awareness about hazards of smoking, a school decided to start “NO SMOKING” campaign.10 students are asked to prepare campaign banners in the shape of triangle (as shown in the figure).
(i) If cost of 1cm2 of banner is ₹ 2, then find the overall cost incurred on such campaign.
(ii) Which mathematical concept is used in this question?
(iii) Which value is depicted in this question?

In a sports day celebration, Pushpraj and Shani are standing at positions A and B whose coordinates are (2, ‒ 2) and (4, 8), respectively. The teacher asked Deepanshi to fix the country flag at the mid-point of the line joining points A and B.
(i) Find the coordinates of the mid-point.
(ii) Which mathematical concept is used to solve the question?
(iii) What type of value is depicted here?