PQR is an equilateral triangle with each side of length 2p. If PS ⊥ OR, then find the value of PS.

In the given figure,  and . Prove that

The diagonals of a rhombus are 30 cm and 40 cm. Find each side of the rhombus. 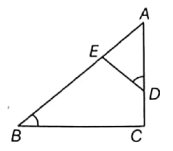 A girl of height 100 cm is walking away from the base of a lamppost at a speed of 1.9 m/s. If the lamp is 5 m above the ground, find length of her shadow after 4s. 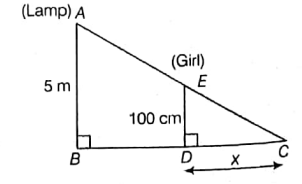 A farmer has a field in the shape of a right angled triangle with perpendicular sides of lengths 128 m and 64 m. He wants to leave a space in the form of a square of largest size inside the field for growing wheat and the remaining for growing vegetables. Find the length of the side of such a squared space. What value is indicated from this action?

In right angled DABC, right angled at C, P and Q are points of sides CA and CB respectively, which divide these sides in the ratio 2:1. Prove that 9AQ2 = 9AC2 + 4BC2.

In the figure of ∆ABC, P is the mid-point of BC and ‘Q’ is the middle point of AP. If extended BQ meets AC in R, prove that .

In the given figure, if PQRS is a parallelogram and AB || PS, prove that OC || SR. NCERT Exemplar 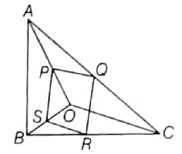 Two trees of heights x and y are d m apart.
(i) Prove that the height of the point of intersection of the line joining the top of each tree to the foot of the opposite trees is given by  m.
(ii) Which mathematical concept is used in this problem?
(iii) What are the values depicted here?

Shweta prepared two posters on National Integration for decoration on Independence day on triangular sheets (say ABC find DBF). The sides AB and AC and the perimeter P1 of ∆ABC are respectively four times the corresponding sides DE and DF and the perimeter P2 of ∆DEF. Are the two triangular sheets similar? If yes, find . What values ran be indicated through celebration of national festivals?

There is a triangular park ABC in a colony (as shown in figure). The Resident Welfare Association of the colony wishes to divide this park into two parts of equal areas—one for planting trees and raising a lawn and the other for providing place for children playing activities. One of the members Salma suggested to draw a line segment XY || BC for this purpose.

(i) State how this line segment XY can be drawn, so that X and Y lie AB and AC respectively?
(ii) What value is depicted from this action?

A man steadily goes 8 m due East and then 6 m due North.
(i) Find the distance from initial point to last point.
(ii) Which mathematical concept is used in this problem?
(iii) What value is indicated in this question?

Consider two similar ∆ABC and ∆PQR as shown in the following figure.

(i) Prove that, if the areas of ∆ABC and ∆PQR are equal, then the ∆ABC and ∆PQR are always congruent.
(ii) If the sides of two similar triangles are in the ratio 2 : 5, then find the ratio of the areas of these triangles.
(iii) If the shape of the two triangles are same but size is different, then both the triangles are congruent. Is this statement true? Justify it.
(iv) Suppose, a person wants to select the triangle having maximum area. For maximum area, he has to select the ∆PQR. What his decision shows?

Amir was asked to prove the basic proportionality theorem. The proof given by him is as follows: 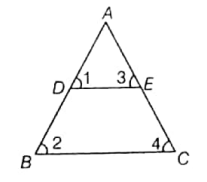 Given ABC is a triangle and DE is drawn parallel to BC to intersect AB and AC at D and E, respectively.
To prove
Proof DE || BC [given]
So, ∠1 = ∠2 and ∠3 = ∠4 [corresponding angles]
[by AAA similarity criterion]


His classmate Madhu told him that his proof is not valid and provided him the correct proof. Amir thanked Madhu for her gentle gesture.
(i) Why Amir's proof was not valid?
(ii) Write the proof given by Madhu.
(iii) What value is depicted from this action?

Find the value of unknown variables, if ∆ABC and ∆PQR are similar.

∆ABC and ∆AMP are two right angled triangles, right angled at B and M, respectively. Prove that CA × MP = PA × BC. NCERT Exemplar

Prove that the line segments joining the mid-points of the sides of a triangle form four triangle, each of which is similar to the original triangle.

In the following figure, if  and ∠CDE = ∠CED, then prove that ∆CAB is an isosceles triangle. 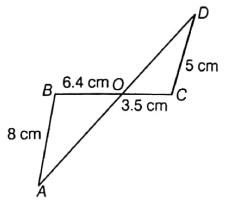 In a ∆ABC, P and Q are points in AB and AC, respectively and PQ || BC. Prove that the median bisects PQ. 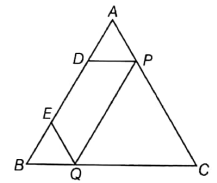 State whether the given pairs of triangles are similar or not. In case of similarity, mention the criterion. CBSE 2015 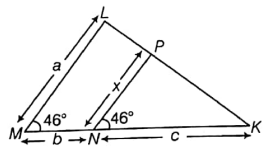 A street light bulb is fixed on a pole 6 m above the level of the street. If a woman of height 1.5 m casts a shadow of 3 m, find how far is she away from the base of the pole? NCERT Exemplar

In the adjoining figure, ABC is a triangle right angled at B and BD ⊥ AC. If AD = 4cm and CD = 5 cm, find BD and AB. NCERT Exemplar

In the given figure, if AB || DC and AC, PQ intersect each other at the point O, then prove that OA · CQ = OC · AP. NCERT Exemplar

In the given figure, l || m and line segments AB, CD and EF are concurrent at point P. Prove that
NCERT Exemplar 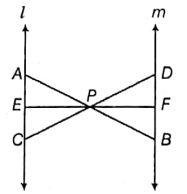 Equilateral triangles are drawn on the sides a right angled triangle. Show that the area of the triangle on the hypotenuse is equal to the sum of the areas of triangles on the other two sides.

A ladder 17 m long, reaches at a window of a building 15 m above the ground. Find the distance of the foot of the ladder from the building.

If the sides of a triangle are 3 cm, 4 cm and 6 cm long, then determine whether the triangle is a right angled triangle. 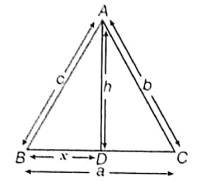 If the lengths of the diagonals of rhombus are 16 cm and 12 cm. Then, find the length of the sides of the rhombus. NCERT Exemplar

Find the altitude of an equilateral triangle of side 8 cm. NCERT Exemplar

There is a staircase as shown in figure connecting points A and B. Measurements of steps are marked in the figure. Find the straight distance between A and B. 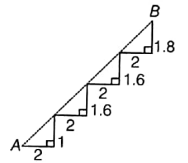 For going to city B from city A, there is a route via city C such that AC ⊥ CB, AC = 2x km and CB = 2(x + 7) km. It is proposed to construct a 26 km highway, which directly connects the two cities A and B. Find how much distance will be saved in reaching city B from city A after the construction on the highway? NCERT Exemplar

Find the third side of a right angled triangle whose hypotenuse is of length p cm, one side of length q cm and p – q = 1. CBSE 2015