Which one of the following is a characteristic feature of cropland ecosystem?
(1) Ecological succession
(2) Absence of soil organisms
(3) Least genetic diversity
(4) Absence of weeds

In which of the following both pairs have correct combination?

Given below is a simplified model of phosphorus cycling in a terrestrial ecosystem with four blanks (A-D). Identify the blanks. 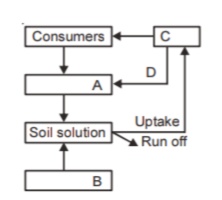 Which one of the following processes during decomposition is correctly described?
(1) Humification-Leads to the accumulation of a dark coloured substance humus which undergoes microbial action at a very fast rate
(2) Catabolism-Last step in the decomposition under fully anaerobic condition
(3) Leaching-Water soluble in organic nutrients rise to the top layers of soil
(4) Fragmentation-Carried out by organisms such as earthworm

Given below is an imaginary pyramid of numbers. What could be one of the possibilities about certain organisms at some of the different levels ? 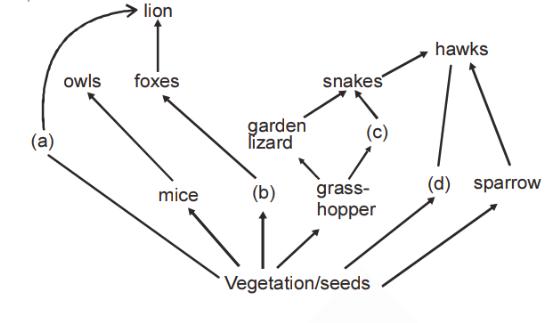 Which one of the following statements for pyramid of energy is incorrect, whereas the remaining three are correct?
1. It is upright in shape
2. Its base is broad
3. It shows energy content of different trophic level organisms
4. It is inverted in shape

Which of the following representations shows the pyramid of numbers in a forest ecosystem?

The slow rate of decomposition of fallen logs in nature is due to their
1. Low cellulose content
2. Low moisture content
3. Poor nitrogen content
4. Anaerobic environment around them