Two small spheres each having the charge +Q are suspended by insulating threads of length L from a hook.  This arrangement is taken in space where there is no gravitational effect, then the angle between the two suspensions and the tension in each will be
(1)
(2)
(3)
(4)

Let  be the charge density distribution for a solid sphere of radius R and total charge Q.  For a point 'P' inside the sphere at distance  from the centre of the sphere, the magnitude of electric field is:
(1)
(2)
(3)
(4) 0

A particle of charge -q and mass m moves in a circular orbit of radius r about a fixed charge +Q.  The relation between the radius of the orbit r and the time period T is:
(1)
(2)
(3)
(4)

The flat base of a hemisphere of radius a with no charge inside it lies in a horizontal plane.  A uniform electric field  is applied at an angle  with the vertical direction.  The electric flux through the curved surface of the hemisphere is 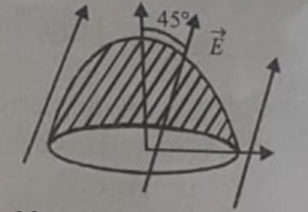 A conic surface is placed in a uniform electric field E as shown in fig. such that the field is perpendicular to the surface on the side AB.  The base of the cone is of radius R, and the height of the cone is h.  The angle of the cone is .  Find the magnitude of the flux that enters the cone's curved surface from the left side.  Do not count the outgoing flux 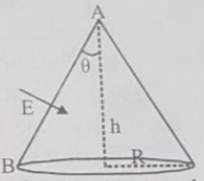 A charge q is placced at O in the cavity in a spherical uncharged conductor.  Point S is outside the conductor.  If the charge is displaced from O towards S, still remaining within the cavity,

A short electric dipole of dipole moment p is placed at a distance r from the centre of a solid metallic sphere of radius a(<<r) as shown in the figure.  The electric field intensity at the centre of sphere C due to induced charge on the sphere is

Two conducting spheres of radii  are charged to the same surface charge density.  The ratio of electric fields near their surface is
(1)
(2)
(3)
(4) 1:1

A large uniformly charged (negative) plate is placed in XZ plane and a positive point charge is fixed on the y-axis.  A dipole is positioned in between with its axis along y-axis, as shown.  The dipole initially moves in 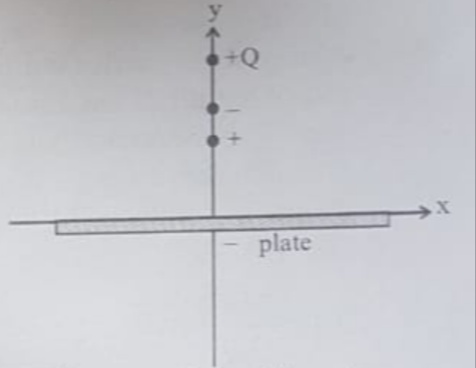 One-fourth of a sphere of radius R is removed as shown in fig.  An electric field E exists parallel to the xy plane.  Find the flux through the remaining curved part. 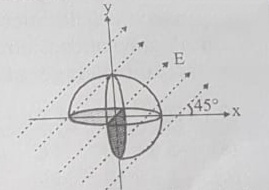 Three infinitely long charge sheets are placed as shown in figure.  The electric field at point P is 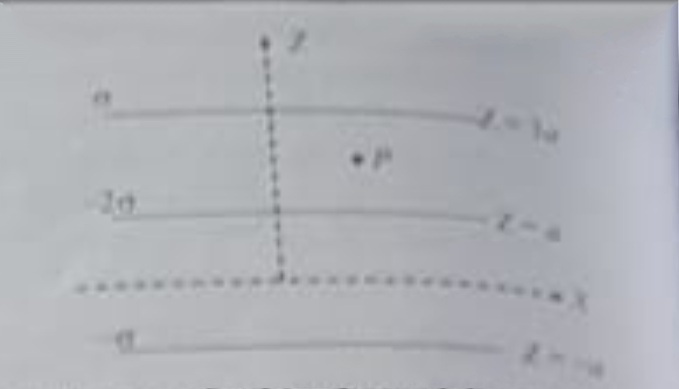 A square surface of side L meter in the plane of the paper is placed in a uniform electric field E (vol/m) acting along the same plane at an angle  with the horizontal side of the square as shown in figure.  The electric flux linked to the surfade, in units of volt, m, is