Two balls of same mass and carrying equal charge are hung from a fixed support of length l. At electrostatic equilibrium, assuming that angles made by each thread is small, the separation, x between the balls is proportional to:
(1) l
(2)
(3)
(4)

Two particles A and B having equal charges are placed at a distance d apart.  A third charged particle placed on the perpendicular bisection of AB at distance x.  The third particle experiences maximum force when
(1)
(2)
(3)
(4)

A spherically symmetric charge distribution is characterised by a charge density having the following variations:

Where r is the distance from the centre of the charge distribution and is a constant.  The electric field at an internal point is -
(1)
(2)
(3)
(4)

A thin semi-circular ring of radius r has a positive charge q distributed uniformly over it.  The net field  at the centre O is

A positive charge +Q is fixed at a point A.  Another positively charged particle of mass m and charge +q is projected from a point B with velocity u as shown in the figure.  The point B is at the large distance from A and at distance d from the line AC.  The initial velocity is parallel to the line AC.  The point C is at very large distance from A.  The minimum distance (in meter) of +q from +Q during the motion is .  Find the value of A.

An electrostatic field line leaves at angle  from point charge , and terminates at point charge  at an angle  (shown in figure).  Then the relationship between  and  is

A uniform charged and infinitely long line having a linear charge density  is placed at a normal distance y from a point O.  Consider an imaginary sphere of radius R with O as centre and .  Electric flux through the surface of the sphere is 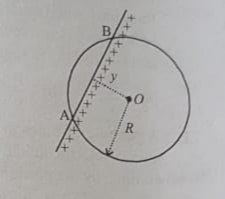