In bacteria the cell cycle is divided into:
1. Only 1 phase
2. Two stages
3. Three periods
4. Four classes

The stage phase of the cell cycle that is expected to be most variable in duration in different types of cells in an animal will be:
1. G1
2. S
3. G2
4. M

Telomerase is an enzyme which is a:
1. Ribonucleoprotein
2. Simple protein
3. RNA
4. Repetitive DNA

Which stage of meiosis is shown in the diagram given below? 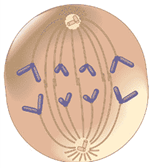 The mechanisms that contribute to the genetic variation arising from sexual reproduction include:
I. Independent assortment of chromosomes
II. Crossing over
III. Random fertilization
1. I and II only
2. I and III only
3. II and III only
4. I, II and III

At which stage of mitosis are chromosomes usually photographed in the preparation of a karyotype?
1. Prophase
2. Metaphase
3. Anaphase
4. Telophase

A prolonged resting phase in oogenesis as seen in many vertebrate occytes is called as:
1. Intekinesis
2. Diakinesis
3. Dictyotene
4. Prometaphase II